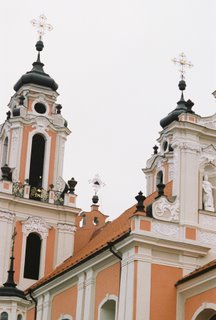 The CBA Christmas Spirits show closed Saturday to rave reviews. Despite a snow storm Thursday, most of the audience showed up. However, our conductor didn’t make it until the second act and the snow delayed the piano player. As they say, the show must go on. Being in 7 numbers was a blast, depsite continuous costume changes. Yesterday I had ear pormpter coaching. The EP is basically a small tape recorder on which you tape scripts, then via an earpiece play them back in your ear for auditions or shoots. It’s amazing how many things you need to think about while using the EP.

My journal of my Lithuania trip should be posted soon…info to follow. In the meantime, here’s another shot of Vilnius.