Just got back from the Romance Writers of America conference in San Francisco. The Today Show stopped by…

If you watched the video, please recall that the reporter says something like “500 authors attended the convention.” Actually, 520 authors autographed books at the booksigning for literacy shown in the story, which raised appx. $58,000 in two hours. Almost 2,000 authors and industry professionals attended the conference (not convention). A big difference, don’t you think?

Comfortable shoes and stamina (and sweaters to combat the air conditioning) were a must. Attendees had at least nine events per hour to choose from…workshops on craft, publishing, research, career and the writer’s life to chats with best-selling authors, publisher spotlights, editor/agent appointments, and publisher sponsored book signings.

I played the tambourine in the opening session, attended events hosted by special interest chapters I belong to (including Hearts Through History Romance Writers and Chick Lit Writers),
participated in a panel workshop with four fellow American Title II contest finalists on the importance of promotion before you sell, did a lot of networking and catching up with friends, and even left the hotel several times to go to restaurants and parties. I participated in the Golden Heart/RITA awards ceremony by handing the awards to the presenters.

The view from the hotel: 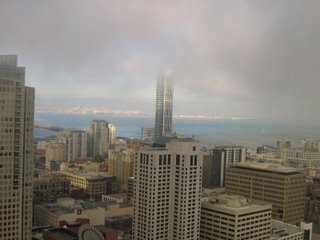 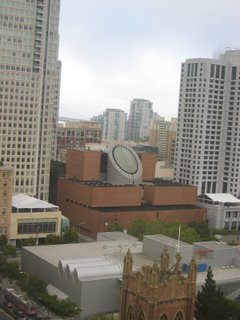