I was pleasantly surprised and honored when Amazon best-selling author Laurel O’Donnell invited me to be part of a box set with her and two more best-sellers, Kathryn Loch and Elizabeth Rose. Thus, Castles, Knights and Chivalry was born! 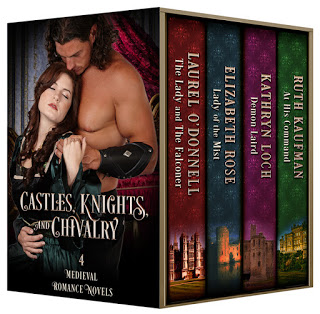 Why was I honored? Because a) they’re all best-sellers, and I’m not…yet? b) so far I’ve released the fewest books by far (#3 should be available before the end of summer…I’m adding another scene dealing with the subplot, which both of the editors I sent it to suggested). The other three authors have been much more prolific.
My first medieval At His Command (set in 1453 England) joins Laurel’s The Lady and the Falconer (1373 England), Elizabeth’s Lady of the Mist (1330 England), and Kathryn’s Demon Laird (1286 Scotland). The set went live last night on Amazon for preorder at just .99.
Given the popularity of TV series based on books, such as The White Queen, which begins in 1464 England, and Game of Thrones, which incorporates many medieval elements, I hope our box set gives medieval readers the opportunity to enjoy four books set in an era they love, and that the .99 price entices those who haven’t read medievals to give the subgenre a try.
What’s not to like about castles, knights and chivalry?