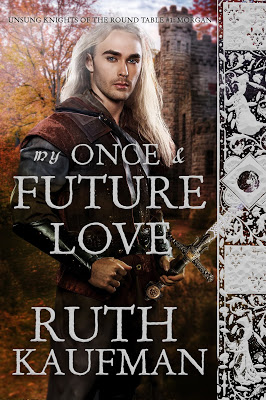 When did you first hear about King Arthur and the Knights of the Round Table? Probably when you were a child, because the tales have been passed down for centuries. There are hundreds of books and movies, including the upcoming Knights of the Round Table: King Arthur.
My favorite Arthurian books include The Once and Future King by T.H. White. And my favorite movie is still Excalibur (who could forget the wedding scene?). I watched that dozens of times when it first came out on HBO.
We’ve all heard of Sirs Lancelot and Galahad. Some know of Sirs Kay, Bedivere and others. But what if there were some we didn’t know about? I decided to tell their tales and journeys toward love in the Unsung Knights of the Round Table series.
Book #1 is MY ONCE & FUTURE LOVE, a medieval romance with magical realism. Morgan ap Myrddin must rescue his father from imprisonment. But enemies have wounded him, draining his powers.
Annora of Amberton flees her castle to seek proof that she’s not a lunatic as her uncle declared when claiming wardship over her and her lands.
He stumbles upon her cottage and enlists her aid. As he helps her in return, undeniable desire sparks. But he won’t succumb to the lure of a mortal woman as his father did. She’s wary of caring for a man who refuses to discuss his past. When he finally tells her he’s a Knight of the Round Table, she fears he’s the lunatic as danger, secrets and destiny thwart the power of love.
I’m working on book #2, featuring a main character in MY&FL. Stay tuned!