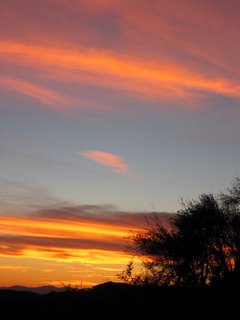 This is a picture I took a couple of years ago from a friend’s house outside of Phoenix.

Just completed FOUR days of working as an extra on Clint Eastwood’s Flags of our Fathers. Day 3, at Union Station, was the most fun for me because 1) I was closest to the action. 2) Clint was often close by and though he is softspoken I got to hear him discussing possible shots and reasons for them. Unfortunately, Day 4 was another of those “all dressed up and no place to go” days. Attired in a different coat and fun hat, with a group of 20 or so others was bussed to Kenilworth from Evanston. But none of us were used. Pictures were taken of us by a bunch of 40’s cars, I hope to get a copy.

Have written two pages this morning, soon off to a chorus rehearsal for a musical revue I’m in…

Question of the day: How much would you pay to acheive a dream…such as going to a World Series game?