I’ve been blessed (or cursed) with curly hair. It’s easy to maintain in a curly style, if a bit frizzy or unruly on occasion. Yet there’ve been many times when I’ve felt the need to or been told to straighten it to be considered for on-camera work.

At one point, an agent would only accept me if I straightened my hair. When I used to do extra work (aka background), hairstylists on more than one major motion picture and a network TV show spent at least a half hour straightening my hair…after I’d already spent the hour or so and multiple products and processes it takes me to do it.

Why? Perception and pigeonholing. What are the first three adjectives that come to mind if you think of someone with curly hair? I’d bet sophisticated, authoritative, commanding, intelligent aren’t among them. Over the years I’ve learned that in TV and movie land, curly hair is perceived as quirky, funny, loud, etc. A perception perfectly illustrated by this IKEA commercial. So the lead’s zany next door neighbor, co-worker or best friend can have curly hair, while the star probably can’t. 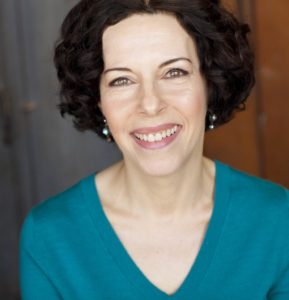 I challenge you to find a serious newscaster or even a TV host with curly hair. The only female doctors I know of on TV with curly hair were Alex Kingston on ER and now Rachel DiPillo on Chicago Med. But this season, her hair seems tamer, perhaps because she’s now working with the hospital psychiatrist and no longer the eager med student. And what about attorneys? Julianna Margulies, star of The Good Wife, wore a straight hair wig to cover her naturally curly hair and save prep time. Can you name one star of a current TV drama with curly hair? Thinking…thinking…no. Even a comedy?

Now I have both curly and straight hair headshots. Double the expense for me, and occasionally confusing if I’m not sure which one was submitted for an audition. Time consuming and a bit stressful especially on a rainy/humid day when frizzies may resist my many hair products and efforts to tame them.

When the specs say spokesperson, professional, upscale, doctor, authoritative, etc., I go straight. This approach did backfire once when the specs clearly said sleek and polished. But the casting director called me out in front of a handful of other actresses, asking, “Where did your curls go?” Ouch. I didn’t get a callback. Because of my hair or my performance?

You might be thinking that the client/director/those with casting power surely know that my hair could be straightened if I wore it curly to an audition. But I’ve been told time and and again by industry professionals that they see what they see in front of them, not what could be.