Hard to believe, but this is my 25th year performing in The Bar Show, The Chicago Bar Association’s original parody musical revue written and performed by talented lawyers. And I’m the chair of the 90th annual production, THE MERRY OLD LAND OF LAWz, which runs December 4-8th. 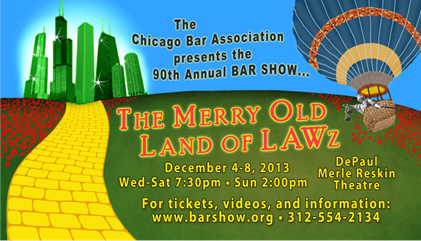 The Bar Show’s not just for lawyers. It’s for anyone who is interested in the news, current events, celebrities and life in general.  Who wouldn’t want to see Governor Quinn opine about same sex marriage to the tune of “Ding Dong! The Witch is Dead?” Hear Lisa Madigan and Deb Mell sing “A Dad Like That” to “A Boy Like That” from West Side Story?
What will The Bar Show’s creative team do with Robin Thicke’s “Blurred Lines” and Macklemore and Lewis’s “Thrift Shop?” Plus we’ll have parodies of songs from popular musicals such as Wicked and The Sound of Music. Casting is underway, and rehearsals start soon.
More than 60 attorneys will dance and sing under the direction of Jeff Award-winning Marla Lampert. My favorite roles include the difficult chair dance in “Rahm Emanuel, the Favorite Son,” My favorite number that I wasn’t in is “Pay Miserables.”
To buy tickets and see highlights of previous shows, visit The Bar Show at www.barshow.org.