My third book, The Bride Tournament, is now part of the boxed set Medieval Hearts: Four Epic Tales of Romance and Passion. It’s on preorder for .99 on Amazon and will be available in Kindle Unlimited when it releases July 12!

In TBT, The Gone with the Wind love triangle meets The Bachelor in late medieval England. The king wants her to marry the new earl, but she wants to marry her betrothed. So she holds a bride tournament to find the earl a better, more willing bride. Who will win his hand in marriage…and his love?

Also in the set are: 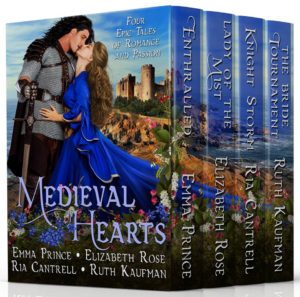 When raiding Northumbria’s holy houses to help his village, Eirik meets Laurel, who stirs him like no other. In an attempt to protect her, he breaks his oath never to claim possession of another person, and claims her as his thrall. But can he claim her heart, or will Laurel fall prey to his enemies’ devious schemes?
Torn between securing her freedom or giving herself to her Viking master, will fate decide for Laurel—and rip them apart forever?

Lady of the Mist by bestseller Elizabeth Rose

Echo, daughter of the infamous pirate, Captain Powell ap Llyr, tries to live up to his expectations of being the son he never had. But when handsome lord Garret is trapped aboard her ship, she can’t let him die at the hands of her father and the crew. Love and honor clash as a nobleman and a pirate fall in love and face the most difficult challenge of their lives.

Respected as a Healer, Rhianna du Montefort turns a deaf ear to hurtful whispers of “witch” and vows not to marry. Sir Erik Ragnorsen is commanded to marry her, but despite his reputation for honor doesn’t wish to marry a witch. Will love be strong enough to weather the storm that threatens to tear them apart?

Hope you enjoy the set, and, if you’re so inclined, leave an honest review.