Twice last year my credit card number was hacked. Once in the TJX Cos. security breach…called the largest in history, with over 46 million TJ Maxx, Marshall’s (and a couple of other chains) customers’ credit and debit cards affected.

I found out when I tried to use my card and was told it had been cancelled. Nice. My credit card company said a new card was on the way, but I hadn’t received it yet. Info on the TJX site says a settlement is being considered in which I may get a $30 voucher.

The second time, someone in NY somehow spent $971 with my credit card number on BestBuy.com. I happened to notice my online statement seemed awfully high. When I first called Best Buy, the customer service woman was very apologetic. She said someone would call to follow up. Three days later, the follow up guy told me he didn’t know if the charge could be cancelled because the item was scheduled to ship. Even worse, his tone made me feel I’d done something wrong. He should have gone out of his way to reassure me that Best Buy was a safe retailer. So I wrote to the president. His contact info was nowhere to be found, of course, on Best Buy’s site. So I used Hoover’s to find him. Several weeks later, I received a $25 gift card.

Is this enough compensation for the frustration, for the time I spent on the phone? On the other hand, how can retailers afford to help everyone impacted by credit card security breaches? How can companies keep their encryption and other technology current, when thieves are working hard to stay one step ahead? 60 Minutes a few months ago did a great but frightening story about how easy it was to drive by some stores and use a laptop to siphon credit card numbers. It’s on YouTube. 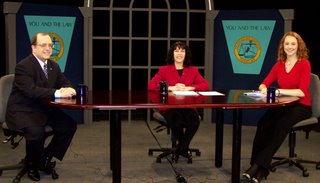 I host a cable program for the Chicago Bar Association…the show taped this week was on this topic. My two guests, Christine Nielsen, Asst. Attorney General, Consumer Fraud Bureau, and William Kresse, JD, CPA, Certified Fraud Examiner, Asst. Professor and Director, Graduate Programs in Financial Fraud Examination & Management,
Saint Xavier University gave some great and simple advice.
First, make copies of both sides of your credit cards and keep them in a safe place. Then, if your numbers are stolen, all the info you’ll need is easily accessible.
Second, be proactive: carefully monitor your statements and charges.
Third, know that while you’re usually not liable for fraudulent charges made on your credit card, you might be for those made on debit cards.